The junior senator from Kentucky needs to control his bead and his memory!

The #2 Senator from Kentucky (Rand Paul),
The 6th poorest state in our union need to remember;
People in glasshouses should not be throwing stones! 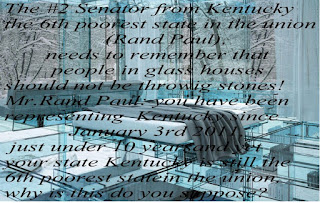 Mr. Rand Paul;
you have been representing Kentucky since January 3rd 2011
Just under 10 years and yet your state of Kentucky
is still the 6th poorest state in the union,
why is this do you suppose?
Mitch McConnell the senior senator
from Kentucky also a Republican,
has served since Jan 3, 1985.
McConnell is next up for reelection
in 2020.


I'm going to assume the Senate Republican is confused about which states are actually in New England.
It also seems likely that he hasn't seen the latest information about the role children play in transmitting the virus.
Paul added, "The history of this, when we look back, will be of wrong prediction after wrong prediction after wrong prediction."
Speaking of wrong predictions, watching the Kentucky lawmaker yesterday, it was hard not to reflect on a similar display from Rand Paul during a public-health emergency in 2014 -- except at that time, instead of trying to downplay a viral threat, the GOP senator was doing the exact opposite.
As longtime readers may recall, in the fall of 2014, with public anxieties over Ebola growing, Rand Paul started making appearances on right-wing radio programs, questioning Ebola assessments from the experts, blaming "political correctness," and raising threats that seemed plainly at odds with the facts. At one point, he asserted without proof that the authorities were deliberately misleading Americans about the virus.
At the time, it was Dr. Anthony Fauci who had to reassure the public that Rand Paul's rhetoric wasn't true.
With a track record like this one, perhaps the senator should, to borrow a phrase, show "a little bit of humility."

Rand Paul said at yesterday's committee hearing yesterday, for example,
"I think we ought to have a little bit of humility in our belief that we know what's best for the economy. And as much as I respect you, Dr. Fauci, I don't think you're the end-all, I don't think you're the one person that gets to make a decision. We can listen to your advice, but there are people on the other side who are saying there's not going to be a surge and that we can safely open the economy."


Fauci responded,
"I have never made myself out to be the end-all and only voice in this. I'm a scientist, a physician, and a public health official. I give advice according to the best scientific evidence."

Posted by Walkingfox at 2:40 PM