Lawyers for WarnerMedia say the footage "has been distorted in such a way as to mislead the public." The ad, dubbed "American Comeback," 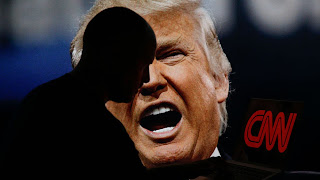 Lawyers for WarnerMedia say the footage
"has been distorted in such a way as to mislead the public."
The ad, dubbed
"American Comeback,"
"purposely and deceptively edits the clip to imply that Mr. Blitzer and Dr. Gupta were crediting the President's travel ban policy issued in January for saving millions of American lives,"
The liar and chief is at it again – or should I say, still?
If you cannot win with the truth, load up the airways with your lies!
https://youtu.be/Ws66liLKGzA
Reads a letter sent to the communications director of trump's campaign, Tim Murtaugh.
CNN's parent company has sent a cease-and-desist letter to trump's reelection campaign, ordering the removal of a new ad using CNN footage in a manner that is "false, misleading, and deceptive." The minute-long ad released Sunday includes a segment from a conversation on a March 30 episode of The Situation Room.
"It could've been 2 million people dead here in the United States?" Wolf Blitzer asks Dr. Sanjay Gupta, who responds, "Yes." But Blitzer actually asked if it was accurate to say there might've been 2 million deaths if "stay-at-home orders, the social distancing orders" hadn't been in place.

This friends is on Centurylink, a solid republican company???
https://centurylink.net/news/read/article/newser-trump_gets_ceaseanddesist_letter_from_cnn-rnewsersyn/category/news
Amid the CNN footage is video of a grounded Air China jet and an airport screen showing canceled flights. Murtaugh responded that "the ad is accurate" as "no discussion of efforts to prevent American deaths from the coronavirus can be had without the understanding that trump restricted travel from China in January." Mediaite reports the campaign is "planning a week-long, seven-figure buy for the ad to run nationwide."

Posted by Walkingfox at 8:02 AM