How many of you still remember 2016 caucus states?

First please remember how many 'Feel the Bern Members'
voted for trump or did not vote
because Hillary won in spite of the corrupt bern machine!
Bernie Groupies are hoping that our ‘interest span’
(sometimes seconds),
in other states voting, 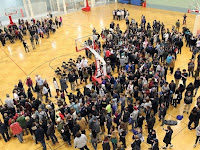 
Think about your
grandparents, wife, or daughter
wanting to vote and 25 or 30 ‘Halfwits


come to visit them to change their vote?


How many of you still remember
(Feel the Bern Groupie halfwits in the 2016 caucus states)?
States which use the caucus system include


I Love my country,


so I pay close attention
to fraud
when it overtake honest voters!

I watched each time state voters (Caucus),
the first time they line up favoring their candidate!
Within seconds Bernie ‘halfwit Goon’
would come to tower over each voter,
demanding they change their vote
and time and time weak voters change their vote,
fearing another onslaught from , ‘Feel the Bern halfwit Goons’!
https://people.howstuffworks.com/question721.htm

Posted by Walkingfox at 9:43 AM